The Autobiography of Goethe Volume 1 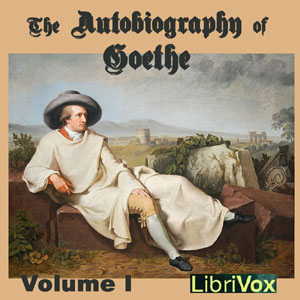 The Autobiography of Goethe Volume 1

This Autobiography of Goethe has a lengthy introduction and short biography of Goethe's life by Thomas Carlyle (1795-1881) and was translated by John Oxenford (1812-1877) in 1848, which was a year of revolutions in Europe. Johann Goethe was a literary celebrity by the age of 25 and was ennobled by the Duke of Saxe-Weimar, Carl August in 1782 after first taking up residence there in November of 1775 following the success of his first novel, The Sorrows of Young Werther (available on Librivox). He lived in Germany from 1749-1832. This period corresponds to the same time as the Seven Years' War, and the French and American Revolutions (1754-1815). Goethe was a member of the Sturm und Drang literary movement. This group of writers believed that literature should shock the audience in order to produce extreme emotions as a counterbalance to the rationalist movement which promoted detachment in the sciences. This is the first part of his autobiography, which he called Truth and Fiction or Truth and Poetry depending on the translator. Goethe wrote poems, such as, The Sorcerer's Apprentice, as well as plays, novels and some scientific works. He wrote the play Faust which is also available on Librivox. He was an Anti-Enlightenment writer. Margaret Fuller (1810-1850) assisted with the 1839 English translation of Johann Peter Eckermann's Conversations with Goethe in the Last Years of his Life.

One reader, Barbara, submitted the following after reading a little of the book. "The publisher, J. H. Moore, seems to have cobbled his book together from sources which are not properly acknowledged if at all. For instance, the "Introduction" merely pinches an essay by Thomas Carlyle which was published in 1828. Google gives the publication date of "The Autobiography of Goethe" as "1901?"(Summary by Wikipedia and Craig Campbell)

Uploaded by librivoxbooks on February 8, 2014